I was at the graduation for my son's school today, as a volunteer, because he will not be a senior until next year. The volunteers were in charge of setting up a lovely reception to follow the ceremony. Everything was pulled together at 2:50, as the event was to take place at 3:00 p.m. The flowers and balloons had been arranged and were in place. The cake, punch, and nuts were ready for the crowd.
Just before the graduation began, a woman ran into the reception area calling out to us: "Call 911, my uncle is ill!" We of course, called 911, and the emergency vehicles were on the way. One of the administrators ran to his office to obtain a AED (Automated External Defibrillators). It has become more and more common for public places to have a machine like this available for cardiac emergencies.
This machine when attached to the victim reads the heart rhythm and directs the responders as to what they need to do until the ambulance arrives. A friend of mine that was present as a mom of one of the 2009 graduates, who is also a cardiac nurse, along with an Oncologist, who had a son graduating assisted this gentleman until the EMTs arrived. The good news is that the man appears to have improved with the passing of a few minutes and that is good considering my friend reported to me that he had NO heart rate and no pulse when she first appeared on the scene. She stated
that the AED was what made the difference in this medical emergency...Thankfully, this school was equipped with one! Hopefully, this gentleman will realize that he has been given a new beginning, and actually, all those folks in the audience should also realize the fragility of life after witnessing this experience...I know these were the thoughts that went through my mind!
And on this graduation day, a day for new beginnings, my thoughts once again returned to my Mama who passed away in October 2006, after just 4 short months of cancer.
When I was with her, I tried to be brave and put up this cheerful front. But there was this one night a couple of weeks before she left us that I was crying openly on the phone as I talked with her. "Joan," she said, "This is a new beginning." And so it was...
Posted by Joan W. Page at 9:55 PM 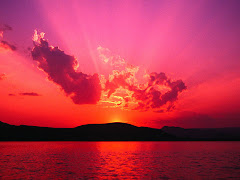